For the second time this month, the Russian federal space agency, Roscosmos, launched one of their crafts to the International Space Station.

Liftoff of the Progress MS-14 uncrewed cargo resupply mission to the orbital outpost launched from Site No. 31/6 at the Baikonur Cosmodrome in Kazakhstan on Friday, 24 April at 21:51:41 EDT — which was 01:51:41 UTC on Saturday, 25 April.

The mission performed a super fast-track rendezvous with the Station culminating in an automated docking just 3 hours 21 minutes after liftoff.

Unusually, Roscosmos has taken the rare step of giving this Soyuz rocket a name: “Victory Rocket”.

The name is part of Russia’s commemoration of the 75th anniversary of the decisive Soviet victory over Nazi and Axis Power forces at the end of World War II in May 1945.

As such, Soyuz also carried special symbols commemorating the 75th anniversary of “the Soviet peoples victory in the Great Patriotic War,” — as World War II was known contemporaneously within the Soviet Union. 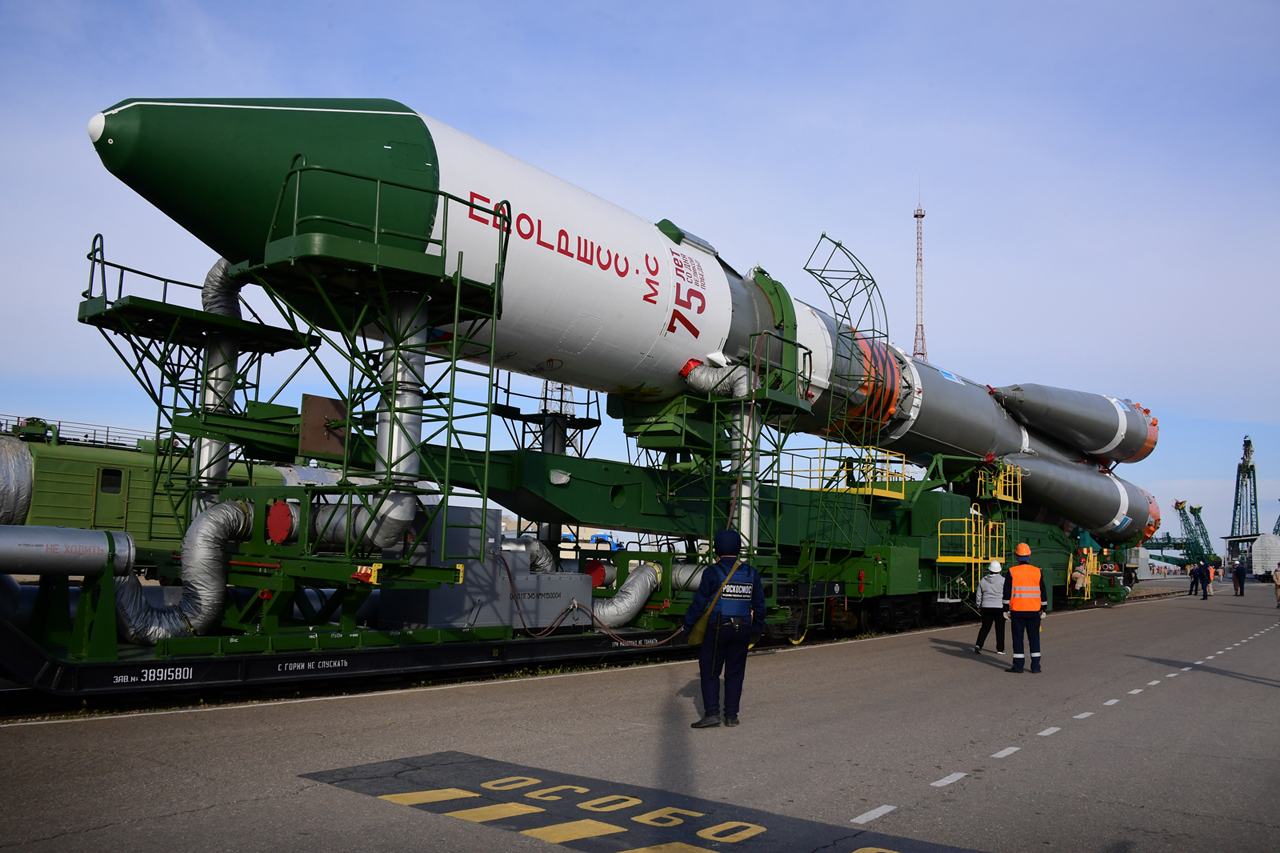 The mission is the first Russian resupply flight of the year to the Space Station.

After undergoing pre-launch, stand-alone processing, Progress MS-14 was encapsulated within its payload fairing on 18 April and shipped two days later to its integration facility — where it was mated to the Blok-I second stage of its Soyuz 2.1a carrier rocket.

Once mated, the third stage was attached to the top of Soyuz 2.1a’s Blok-A core stage, completing rocket integration activities on 21 April.

The entire rocket stack was then rolled out to Site No. 31/6 at Baikonur via train on 22 April for final pre-launch processing.

The Soyuz 2.1a began flying on 8 November 2004 and was last used just two weeks ago to launch three crew members to the International Space Station — the first time this rocket variant flew with people aboard.

At the time of today’s single-second, instantaneous launch window at 01:51:41 UTC, the International Space Station was 506 km west-southwest of Baikonur.

Location of the International Space Station at the exact second of the planned launch of Progress MS-14. (Credit: GoISSWartch App)

The flight path — or azimuth — took the Soyuz rocket on an east-northeast trajectory out of Baikonur, ensuring Soyuz and Progress did not overfly any country except Kazakhstan and the Russian Federation during powered ascent.

The goal is to specifically avoid powered-flight land overflight of Mongolia and China — which is what gives the International Space Station its 51.6° orbital inclination.

After an 8 minute 46 second ascent, the Soyuz finished its launch program and Progress separated from the Blok-I upper stage of the Soyuz 2.1a rocket.

Immediately following spacecraft separation, Progress deployed its solar arrays and communication antennas (as seen in below embedded tweet from the Soyuz MS-16 launch earlier this month) and transmit its orbital parameters and velocity data to the ground via the Vostochny Cosmodrome in eastern Russia.

Under six hours to the ISS.

This data downlink immediately after spacecraft separation was vital to ensuring the Soyuz rocket met the necessary velocity and orbital targets needed for Progress MS-14 to perform the 2 orbit, 3 hour 20 minute rendezvous and docking with the International Space Station.

If for some reason the information could not be verified or Progress was placed in a slightly incorrect orbit, Mission Control Moscow would have reverted Progress MS-14 to the back-up 2-day, 32 orbit rendezvous profile that is always available for Russian missions to the Station.

With a good orbit insertion, Progress performed a series of delta-Velocity (or delta-V) burns with its engines and thrusters to systematically increase its velocity — which in turn increases orbital altitude — and modified its orbit from an initial insertion of 193 ±2 km x 240 ±7 km up to the 417 x 419 km orbit of the International Space Station.

About 25 minutes prior to docking, the U.S. Operating Segment of the Station (including the U.S., Canada, Europe, and Japan) handed off orientation control to the Russian Segment in preparation for docking.

Of note, the automated docking program used by Roscosmos for Progress vehicles usually results in the crafts’ docking between 3 to 7 minutes ahead of the published timeline.

These hooks formed the hard seal necessary to pressurize the space between Progress and the Station before the crew can gain access to the cargo and goods inside the vehicle.

After hard docking is accomplished, the Russian segment of the International Space Station handed control of the orbital complex back to the U.S. Operating Segment.

Overall, Progress MS-14 delivered over 700 kg of propellant, air, and gases as well as 1,350 kg of cargo, including food, equipment, hygiene products, clothing, medical supplies, and science equipment, as well as 429 liters of water.

The oxygen tanks on Progress will also be used to transfer 46 kg of air to the Station.

Infected bees were less likely to be fed by other bees, a common behavior shown here. Nathan Beach/University of Illinois, Urbana-Champaign; Tori Beach By Erik StokstadApr. 28, 2020 , 3:00 PMSocial distancing is nothing new to honey bees. When a colony is infected with the deadly Israeli acute paralysis virus (IAPV), bees are less likely…
Read more
Science & Nature

When a small black hole (left) crashes through the accretion disk of the OJ 287 galaxy it creates a flare brighter than 1 trillion stars.  NASA/JPL-Caltech In the OJ 287 galaxy, about 3.5 billion light-years from Earth, two black holes are trapped in an endless dance. The supermassive black hole at the center of the…
Read more
Science & Nature

An asteroid more than a mile wide is set to make a pass by Earth, although scientists insist it poses no danger. Known as (52768) 1998 OR2, the asteroid will come to about 3.9 million miles away on Wednesday 16 times further than the distance to the Moon whe…
Read more

BREAKINGThe move is a major escalation in the investigation into the senator's sale of stocks that came as President Trump and other Republicans were playing down the threat of the coronavirus.Senator Richard Burr, Republican of North Carolina, sold hundreds of thousands of dollars’ worth of stock in mid-February.Credit...Pool photo by Win McnameeMay 14, 2020Updated 12:45…
Read more

A massive chuck of China's failed rocket fell to Earth Monday, but a few minutes sooner and it would have crashed right into New York City.Reports say that debris would have rained down on the Big Apple if the Long March 5B rocket would re-entered the atmosphere just 15 minutes earlier.The Chinese rocket carrying an experimental…
Read more

An audio feed of Supreme Court oral arguments in Trump v. Mazars and Trump v. Deutsche Bank AG, dealing with the subpoenas from the US Congress to obtain US President Donald Trumps financial records, is heard via a teleconference due to COVID-19, known as coronavirus, as seen on a laptop in Washington, DC, May 12,…
Read more

A herd of nearly 200 goats made their escape Tuesday when they broke the boards of an electric fence and took over East San Jose streets."When I got back from the store all the goats had broken through the fence and were wreaking havoc on our street," tweeted Zach Roelands alongside a video of the…
Read more
Load more

(CNN)President Donald Trump on Monday urged the nation's governors to "seriously consider" reopening schools as part of his push to restart the economy, though many states have already recommended against resuming the school year. "Some of you might start th…
Read more

With no clues about when the pandemic might subside, short-term discomfort is becoming long-term despair: “I feel like I have accepted this, and given up.”April 25, 2020ImageNew York City’s sidewalks, like this one in the Williamsburg section of Brooklyn, have been empty for weeks.Credit...Juan Arredondo for The New York TimesA walk in the park brings…
Read more

NewWorldTrend.com chooses the most popular among global news and presents you with the most readable content. It is absolutely neutral as we combine news from different directions. You can only see users' favorite news. Pleasant readings. Our improvements continue.